Bogotá is the only Latin-American destination member of the Alliance. With its captivating culture and strong mix of modern and traditional customs, it is an exciting location that promises to be the setting for an extraordinary event.

The Capital of Colombia, embraces a history that goes all the way back to the 15th century and now features a 21st century modern and diverse metropolis, home 8 million people.

Making your way through the city will lead you to the oldest Museum in Latin America – National Museum, the largest collection of pre-colonial gold pieces at the Gold Museum, graffiti art, handcrafts, more than 2.000 restaurants and bars, emeralds markets, fruit markets and off course, the smoothest coffee in the world. 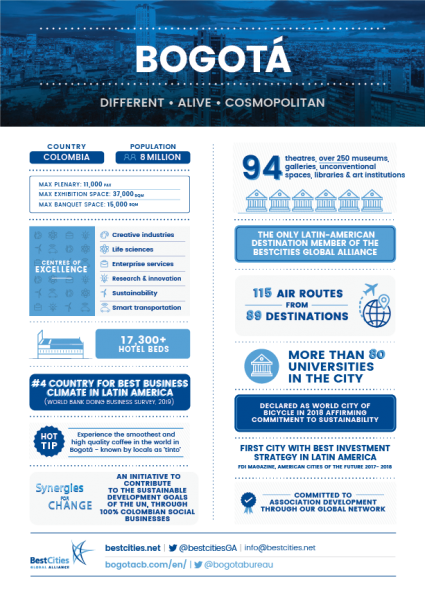 For many years Bogotá and Colombia have had a misperception of security very far from reality. Even if the dramatic security situation back in the 80’s and 90’s cannot be denied, nowadays Colombia faces a completely different reality as a consequence of the different changes implemented from 2001 and a process of transformation. An evolution of 16 years and solid facts allows us to say that the only risk of coming to Bogotá is wanting to stay.

As a growing international meetings destination, Bogotá is currently ranked 50th in the world among more than 900 destinations classified by ICCA. Also, the city was the winner of the ICCA Best PR Award in 2015 and was one of the four finalists for the ICCA Best Marketing Award 2016.

Passion is a word that defines the team of the Greater Bogotá Convention Bureau. The GBCB is absolutely passionate about the meetings industry and they are madly in love with their city. They want to share that passion with you!

The Greater Bogotá Convention Bureau focuses on client service excellence to work towards the success of events. http://www.bogotacb.com/en/

Find more information on the city of Bogotá